How to get your kids to read books 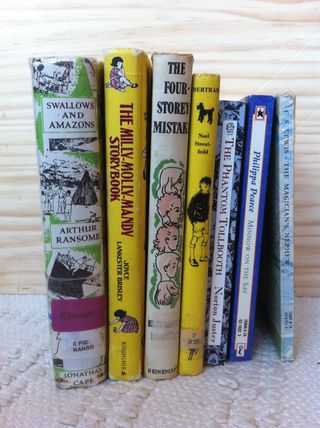 "I must say I find television very educational. The minute somebody turns it on, I go into the library and read a good book."  Groucho Marx

I was really lucky when I was growing up in the 1970s.  That was when my parents decided not to buy a television so I would learn to read instead.  Growing up I always thought we didn't have a television because we couldn't afford one but a few years ago my mum told me that it was so I would learn to read instead.  They succeeded beyond their wildest dreams and I became a total bookworm - hooked on the written word and the turning of the page.

When I had kids I knew that I didn't want them to have a television as they were growing up.   When my daughter arrived, it was a little harder by then to imagine and create a life without television as it was already in our lives.  Luckily, around the time she was two, our television broke and there's been no looking back.  There are many reasons why I read to my daughters.  The main ones are I love reading to them and getting that wonderful connection as we share our imaginary worlds.

So my advice for reluctant readers?  Turn off the television and computer.  Strew interesting books in key locations around your house.  Read to them.  Read books yourself where they can see you doing it.  Spend hours at your local library reading to them.  Find out what they are interested in and borrow a book about it.  There is literally something in a library for everyone.  And the best thing is - it is free!  The more you share your love of reading, the more they will want to read.  Its contagious!

This is only a preview. Your comment has not yet been posted.

The letters and numbers you entered did not match the image. Please try again.

As a final step before posting your comment, enter the letters and numbers you see in the image below. This prevents automated programs from posting comments.

Having trouble reading this image? View an alternate.

(You can use HTML tags like <b> <i> and <ul> to style your text. URLs automatically linked.)

(Name is required. Email address will not be displayed with the comment.)